To reveal too many of the surprises packed into Emerald Fennell’s debut feature Promising Young Woman would do its sheer audacity a great disservice. The twists and turns of the plot are what makes this candy-colored, pop-infused thriller thoroughly entertaining, from its gleeful “Gotcha” opening moment to its more jaw-droppingly devastating closing scene. But Promising Young Woman is far more than a playful take on female revenge fantasies in a world still marred by a lack of justice for women even in the midst of a #MeToo revolution. The film’s true power stems from its no-holds-barred examination of raw, raging grief left to fester when faced with dismissive silence.

Cassie (Carey Mulligan) is hurting. It’s been years since she dropped out of medical school under mysterious circumstances, and she’s spent them all working in a coffee shop in the light of day and trying to address the lingering pain of a shadowy past sexual assault under the cover of night. 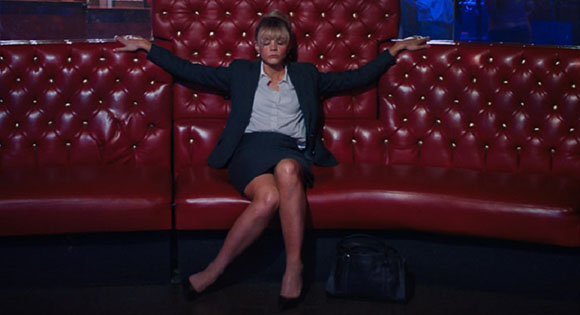 Cassie is clearly stuck in a cycle, but she’s also incredibly creative, wreaking regular retaliation against men in ways that lie far outside the box. She’s taken it upon herself to act as a one-woman inquisition, going out each weekend to pretend to be too drunk to stand in order to force bumbling bros into revealing their true natures, that of budding sexual predators. She keeps a notebook filled with pages of hash marks and first names, a chronicle that preserves the memories of this empowering, but perhaps pathological, practice.

Cassie’s connections to the world beyond her obsessive outings seem to only be through her tentative parents (Jennifer Coolidge and Clancy Brown) and her boss (Laverne Cox), all three supportive but also mystified by Cassie’s seeming stagnation. When an old med school classmate Ryan (Bo Burnham) enters the coffee shop, recognizes Cassie, and asks her on a date, things start to look up, but it will take more than new romance to pull Cassie out of her old habits and rhythms. 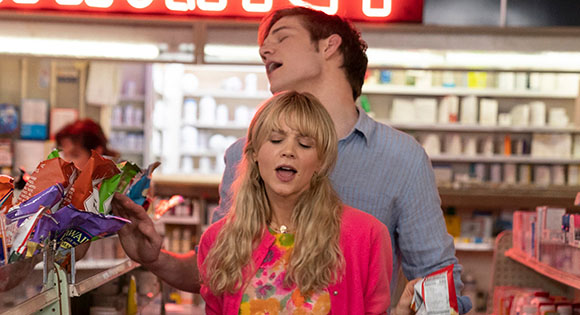 While Ryan courts Cassie, she shifts into carrying out more carefully constructed details of what slowly reveals itself to be her master plan. One by one, those whom Cassie considers to be enablers of the toxic masculinity that has kept her from achieving the reparations she seeks must be taken out. First comes the friend (Alison Brie) who laughed off the facts of the assault. Next is the med school dean (Connie Britton), who claims to not even remember the incident. There’s the lawyer (Alfred Molina) who made threats until the case was dropped, and finally, there’s the culprit himself (Chris Lowell), a classically milquetoast charmer who, unsurprisingly, has deluded himself into believing that he’s done nothing wrong. Cassie has plans for comeuppance for all of these guilty parties, but surprises await her as well, leading to layers of increasing complexity that launch the proceedings out of the initial clever combination of justice-minded bad behavior and into something altogether more melancholy and chillingly meaningful.

At its core, this is the story of a woman desperately trying to address the violent legacy of the past by devoting every moment of her present to fixing it. But by disappearing into her own unique approach to grief processing, Cassie fails to allow herself to live into any kind of future that might free her from the guilt and shame that so torments her. She is, by definition, a survivor, but her survival is so steeped in revisiting the sites of her pain that it barely looks like survival at all.

Promising Young Woman is an examination of the spiritual rot that too often destroys the souls of victims, while protected perpetrators cleanse their own consciences and the rest of the world turns away. The fact that every bit of Cassie’s journey, even at its sassiest and most self-assured, feels wholly authentic to the experience of trauma survivors in a world where justice is so seldom tasted, makes the film’s messy message particularly haunting. Cassie might have her plans all laid out, but as starkly underlined in her final act, when justice is delayed and denied, even the most promising among us can lose themselves in the sheer cruelty of it all. What will it take for callous, careless individuals and institutions to address this erasure and give these survivors back their vital voices, helping them to move beyond victimhood to a healing that can only come from witnessing actual accountability? This promising young woman’s audaciously self-sacrificing approach should jolt our sleepy society awake.