Flannery O’Connor (1925 – 1964) had a keen sense of vocation. She knew who she was and what she was put on Earth to do. The mystery moved in and around her from God’s side and the human adventure shot through her days with moments of shattering revelation. Through her creative imagination, she spun out her unique takes on Southern life in two novels, Wise Blood (1952) and The Violent Bear It Away (1964), along with 31 tales which were gathered together in a 1971 volume titled The Complete Stories. Her characters included country judges, landowners, farm hands, and evangelists, and through their strange, wild, and often violent actions, she sought to convey how salvation can crash life’s party.

“Flannery” is a polished, erudite, and spiritually edifying portrait of this writer whose popularity has grown over the years among both literary and popular readers. O’Connor was raised on a farm in Milledgeville, Georgia, where she took an early interest in drawing cartoons and caricatures. She demonstrated her interest in odd things by teaching a chicken to walk backwards. Her father died of Lupus in 1941 when she was just 16; she herself would later suffer for years from the disease, living until her death on the family farm with a large group of peacocks. 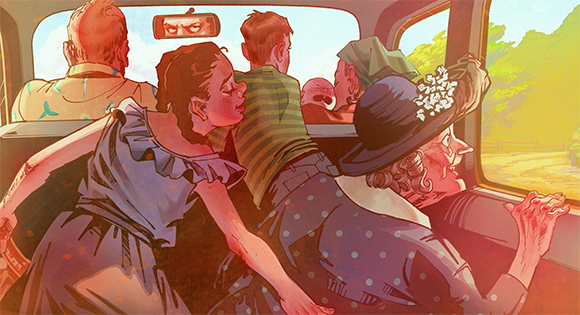 But in the meantime, she worked on her craft, attending the prestigious Iowa Writers’ Workshop at the University and then joining an artists’ colony in Saratoga Springs, New York. Those days and her friendships with writers are documented with archival photographs and film footage in the documentary.

The directors of this documentary have brought together a sophisticated, diverse and articulate selection of commentators to shed much light as possible on this writer’s views on the Christ haunted South, the rampant racism of the region, salvation and grace, and the suffering endured by Negroes under segregation. Among those featured in interviews or readings are Michael and Benedict Fitzgerald, Brad Gooch, Richard Rodriguez, Alice Walker, Tommy Lee Jones, Hilton Als, Alice McDermott, Tobias Wolff, Bill T. Jones, and others offer commentary and tributes to O’Connor’s unique art.

At Spirituality & Practice, we have long paid attention to Flannery O’Connor’s work.

At the turn of the millennium, HarperSanFrancisco, a leading publisher of religious and spiritual books, asked Philip Zaleski, editor of the annual The Best Spiritual Writing series, to compile a list of the 100 Best Spiritual Books of the 20th Century. 100 best books in the genre. S&P’s Co-Founder, Frederic Brussat, was on the panel. One of the those chosen was Flannery O’Connor’s novel Wise Blood, which was made into a film directed by John Huston in 1980.

In our review of the Wise Blood film, we called it “one of the best realized religious dramas in many a moon.” We also wrote: ” ‘The fiction writer,’ Flannery O’Conner once noted, ‘presents mystery through manners, grace through nature, but when he finishes there always has to be left over that sense of Mystery which cannot be accounted for by an human formula.’ John Huston has intuited this truth from his screen adaptation of O’Connor’s first novel Wise Blood. The seemingly grotesque characters who populate the story are very human in their religious hungers and their poignant cravings for love and recognition.”

We also reviewed The Habit of Being: Letters of Flannery O’Connor by Sally Fitzgerald which covers a time span from 1948, when this Southern writer started looking for a literary agent, until 1964 when the last letter she wrote was found on a bedside table shortly after her death. Many sides of her soul are revealed in letters to literary folk, people in the publishing industry, and religious friends. One group of letters provide the best insight into this artist’s “habit of being.” They are written over a nine-year period to a friend who is called “A.” In them O’Connor talks extensively about her Catholic vision of life, and even more importantly, of the intersection where her faith and fiction meet to transform each other. (See the review for a sample.)

More of O’Connor’s religious views are evident in Flannery O’Connor: Spiritual Writings edited by Robert Ellsberg. In his illuminating introduction, Richard Giannone states: “As with the winged creatures she observed from her back porch, there is in O’Connor an energy that is always on the verge of taking flight from containment.” An excerpt from this book covers her understanding of grace and mystery in writing.

O’Connor’s first collection of short stories, A Good Man Is Hard to Find, was one of the selections for the We the People Book Club of the Practicing Democracy Project. A Reading Guide is available as a free pfd download and more commentary on the book are included in a 4-session e-course. These resources include background on Flannery O’Connor, an overview of the short story collection and observations on O’Connor’s literary style. For your personal exploration and/or discussion with others in your book club, there is also commentary on three themes: human sin, redeeming grace, and the abundance of nature.

The Music of the Day